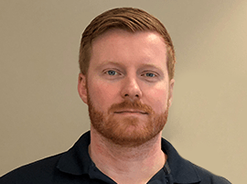 While dozens of graduates of Spalding Univesity’s Auerbach School of Occupational Therapy  work in and around Louisville, many other alumni have found jobs across the country that they said pay well and are personally fulfilling. Here, we highlight one of them – 2015 alumnus Tom Cox, who is a hand therapist in Florida.

Tom Cox credits his Spalding Level II fieldwork under and current ASOT faculty member Dr. Greg Pitts for setting him on the path to success in hand therapy. He said that right after graduation, he earned a job in Washington, D.C., making $79,000 initially and that within the first year received a raise to six figures. As of the summer 2018, he works under a group of hand surgeons and orthopedic surgeons in South Florida.

Cox said Pitts instilled in him the “Four C’s” of a successful therapy practice – caring, communication, confidence and competence. “His big philosophy is that if you love patients, they recognize that, and you’ll never be slow at your clinic,” Cox said. “That’s how I’ve operated, based on his philosophy. If patients know you genuinely care about them, genuinely love them, and are genuinely invested in them getting better, they’ll bend over backwards for you with what you ask of them.”

From 2013-17, 95 percent of Spalding graduates passed the National Board Certification of Occupational Therapy (NBCOT) exam, which is required to become a registered and licensed occupational therapist. Cox said he was impressed by the way the Spalding faculty prioritizes board exam preparation.

“At Spalding, you’ve got some of the best professors in the nation, in my opinion,” Cox said. “You had really good professors who were passionate about the subjects, so they armed you with the information you need. And they prepare you for that NBCOT extremely well, and that’s what you want to be prepared for. If a program doesn’t prepare you for the boards, it’s not worth going to. … If anyone wants to be set up for success, Spalding would be the place to go.”

Learn more about the Auerbach School of Occupational Therapy and its new doctor of occupational therapy (OTD) program.