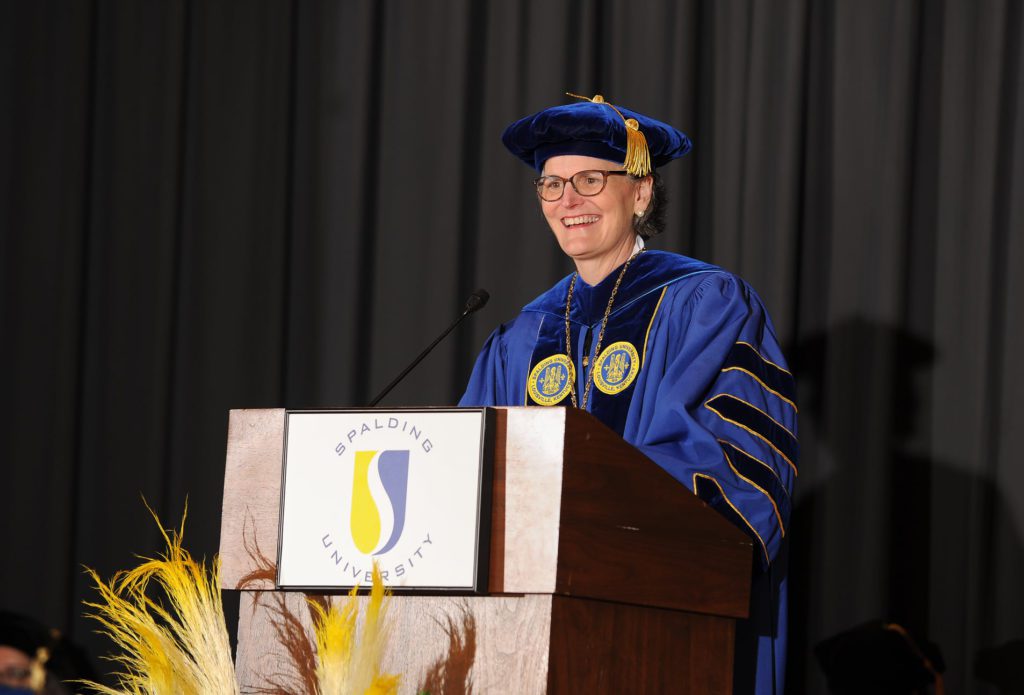 Spalding University as an institution and President Tori Murden McClure as its top executive were both announced last week as award recipients from Louisville Business First. President McClure was named to Business First’s 2021 list of Greater Louisville’s Most Admired CEOs, and Spalding has received a Business Impact Award for its contribution to furthering racial justice and equality (subscription link).

Spalding, McClure and the other honorees will be recognized at an event at the Galt House on Nov. 9 as well as in the Nov. 12 edition of Louisville Business First.

Spalding is one of  six organizations to be honored with a Business Impact Award, which goes to “companies or organizations who have taken specific steps to assist their employees or community during the Covid-19 outbreak and/or to further racial justice and equality,” according to Louisville Business First.

Spalding was an outward supporter of protests against racial injustice in downtown Louisville in 2020 and hosted two demonstrations on campus. Since 2020, it has leaned into its social justice mission, launching curriculum for its Bachelor of Science in Criminal Justice Studies program that uniquely focuses on restorative justice and criminal justice reform; developing the Collective Care Center as Louisville’s only behavioral health clinic focused on treating racial trauma; appointing Collective Care Center director and psychology faculty member Dr. Steven Kniffley to be Chief Diversity Officer; launching a professional development/continuing education training program for outside groups in antiracism; and earning a $200,000 grant from the James Graham Brown Foundation to support diversity and equity initiatives.

McClure, who is in her 11th year as President at Spalding, is one of 25 chief executives in a range of industries to make the list of Most Admired CEOs for 2021. Louisville Business First describes the Most Admired CEOs program as one that recognizes “outstanding chief executives and those holding equivalent titles” who are “innovators, standard-bearers, role models and exceptional leaders. Their contributions impact the company they head as well as the community in which they serve. A commitment to financial success, quality, workplace wellness, diversity and philanthropy are hallmarks of an exceptional and admired chief executive.”

Spalding is the only organization in 2021 to be honored both for Business Impact and for having one of the Most Admired CEOs.

During her time at Spalding, McClure has overseen an expansion of the university’s downtown campus to 23 acres, including the creation of two on-campus parks totaling more than 3.5 acres, a 7-acre athletic fields complex on Ninth Street and the acquisition and renovation of the Republic Bank Academic Center, which houses the schools of nursing and social work. Spalding is currently renovating a 22,500-square foot building at 961 S. Third Street that will become the home of the new Kosair Charities School of Physical Therapy and Center for Interprofessional Education.

Over the past 18 months, she guided Spalding into the aforementioned diversity and inclusion initiatives while also leading the university to a transition in spring 2020 to fully remote learning at the onset of the COVID-19 pandemic, a safe partial return to in-person operations in Fall 2020 and a safe full return to in-person operations in Fall 2021.

In 2020, McClure wrapped up a term on the NCAA’s Board of Governors – the highest-governing body in collegiate athletics. She served as Vice Chair and, for a brief period, Interim Chair of the Board of Governors as the NCAA addressed the pandemic’s impact on competition and championships.

In August 2021, a major stage musical titled, “ROW,” based on McClure’s life and memoir made its world premiere at the acclaimed Williamstown Theatre Festival in Massachusetts. An audio version of the musical debuted in April on Audible.