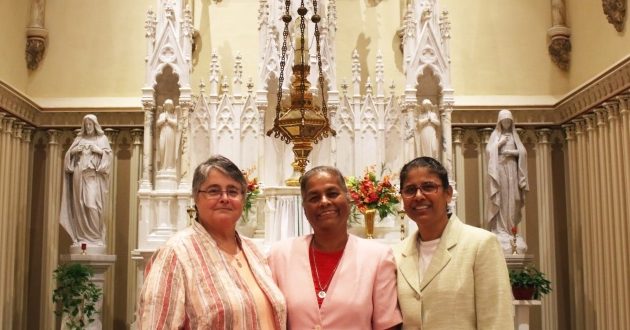 All three are expected to attend the Spalding Founders’ Weekend reunion dinner on Saturday evening.

“We keep searching for ways to reach out in compassion and justice and to speak our truth in the spirit of the gospel,” Sister Sangeeta said. “I believe Spalding is following in that path and tradition.”

As a 26-year-old, Sister Sangeeta came to Nazareth and Spalding in 1985, her first time ever in the United States. She majored in business administration with a minor in biology. The business program was a small one at the time, and she was its only international student. She knew that when she came to Spalding that she would eventually be headed back to India to pursue SCN ministries and to work in hospitals, and she said her college education prepared her well.

“There was such a friendly atmosphere, a welcoming atmosphere, which helped me a lot to get adjusted,” she said. “That time really stretched my world view about things, and I found the education system as very broadening. It really prepared me.”

Sister Sangeeta graduated in 1988 and went on to earn a master’s in hospital administration at Xavier University. She worked in administration at three hospitals in India and has served in various SCN leadership roles, including the term that just ended as vice president alongside President Susan Gatz, SCN, who’s also a Spalding alumna.

Sister Adeline, who is a Louisville native and alumna of Angela Marici High School, graduated from Spalding in 1974. She also served on the Spalding faculty from 1996 to 2007 as a religious studies professor.

“It was a good time for me,” she said of her undergraduate years. “I had some really good teachers, many of whom were our own sisters. My time there (as a student and a faculty member), especially my early days, were quite fulfilling. I thoroughly enjoyed working with the people in what was then the College of Arts and Sciences. We had a great group.”

Sister Adeline, who was the provincial of the SCN Western Province from 2012-17 and vice provincial from 2007-12, also holds a master’s in theological studies from Catholic Theological Union and a doctorate in scripture from Vanderbilt.

“I was the first college graduate in my family,” she said, “and I know many of the students at Spalding are first-generation college students. It’s important that Spalding continues to be that niche in Louisville.”

Sister Jackulin, whose work has also primarily been in hospital administration, studied nursing at Spalding from 1990 to ’94. Known as “Jackie from India” because she had three classmates and a dean who were also named Jackie, she was, like Sister Sangeeta, the only international student in her program.

“It was a great experience,” Sister Jackulin said. “My classmates were so good to me.”

She fondly recalls her commencement ceremony in which she won the nursing class’ humanitarian award as voted on by faculty and students.

Sister Jackulin passed her nursing boards and did a brief stint as a nurse in Lexington before returning to India to work in nursing, then administration at various hospitals.

By doing her clinical work in hospitals all around Louisville, “nursing at Spalding gave me a good foundation” for her work in India, she said.

Sister Jackulin said there are many Spalding SCN alumni serving outside the United States, spreading the spirit of service and compassion that Mother Catherine Spalding helped foster.

“But even if they have not studied at Spalding, the Spalding spirit is there – in ministries across India, Nepal, Botswana,” Sister Jackulin said. “Mother Catherine found that spirit, and we carry it everywhere we go. She responded to whatever the need was at that time, whether it be cholera, caring for orphans, whatever it was at that time, and her legacy is lived out today wherever the Sisters of Charity of Nazareth are.”