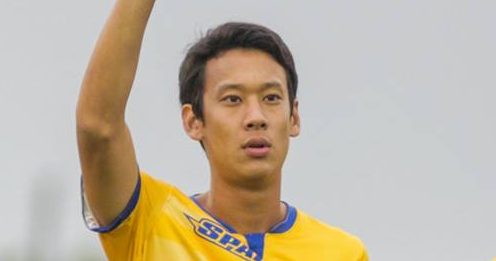 Tenko Kono has appeared in every Spalding University men’s soccer game during his four years with the Golden Eagles, and just in time, on his Senior Day, his parents finally got to see him play in person.

The defensive midfielder and back said he was thrilled to have his family travel from Japan last weekend to attend Spalding’s regular-season finale.

“I wanted my mom to see how hard I’ve worked the last four years, so it was nice to have her watch me play,” Kono said.

It gave an emotional boost to a player who’s heading into his final postseason with the goal of leading Spalding to a conference tournament title and its first NCAA Division III Tournament berth. Kono’s top-seeded Golden Eagles will host No. 4 Iowa Wesleyan in the St. Louis Intercollegiate Athletic Tournament semifinals at 7 p.m. Thursday at Bellarmine University’s Owsley B. Frazier Stadium.

The winner will face the winner of the Webster-Greenville semifinal in Saturday’s title game with an automatic bid to the NCAA Tournament on the line.

“My goal since high school (was to) play in the NCAA Tournament,” Kono said. “That would be pretty cool to finish my career by playing on the national stage for Spalding.”

Kono moved to Lexington, Kentucky, as a 12-year-old when his father’s job with a logistics company led him there. Kono attended and played soccer at Lafayette High School. His family moved back to Japan after Kono graduated high school, but he wanted to attend college and play college soccer in the United States.

He got that chance at Spalding, and by doing so, Kono said, he’s found a home away from home.

“People are nice here,” said Kono, whose Golden Eagles won SLIAC regular-season titles in 2016 and ’18. “People treat me like I’m a part of their families. We’ve won two conference championships. I have a great coaching staff. My teammates are amazing.”

Spalding has multiple international players, and Kono said he’s always felt like the program was a good fit for him.  A psychology major, Kono said he plans to move back to Japan after graduation, but he hopes to find a job like his father had that allows him to travel and maybe live for a while in the U.S. or another country.

During his time in Louisville, Kono said he’s successfully introduced his teammates to Japanese food and music. A couple of Japanese pop songs are in regular rotation for a group of Golden Eagles when they ride together to games, Kono said with a laugh.

He expects to have support from afar this week. He said his family members, who are 13 hours ahead of Louisville in Japan, try to watch all his games on the online live stream, even when they occur during the middle of the night.

They’ll be watching a player who’s been a mainstay on Spalding’s defense, leading the team in minutes played (1,651). Kono’s the only player to start all 18 games.

“The amount of ground he covers in a game is really incredible,” coach Adam Boyer said. “He came in extremely fit this year, and his defensive tenacity has been my favorite aspect of his game. He reads the play well, and he’s a very good tackler of the ball. He’s not afraid to get into challenges in the air, 50-50 balls, so he does a lot of the dirty work. An aspect he’s been much improved on this year is his ability, once he wins the ball, to pass out of pressure and connect with his teammates.”

He’s also scored two goals, including an overtime game-winner on a penalty kick at Principia on Oct. 20. He was named the SLIAC Defensive Player of the Week after that game.

“As a senior and a captain, I had to take that kick,” he said, “so I stepped up and put it in the back of the net.”

Kono figures to get more chances to step up this week.

He’s already left a mark on the Spalding program.

“Tenko is a great example of someone who came in with the right attitude, the right work rate, the right approach to being a student,” Boyer said. “He is kind of that senior leader, the guy everybody looks up to. He’ll finish his career having played in two postseasons, winning two regular-season conference championships. He’s really just an example of everything you’d want in a student-athlete.”

Ready to play under the lights

With this week’s rainy weather, Spalding moved Thursday’s game off the grass to Bellarmine’s turf field. Boyer said the Golden Eagles are excited to play a night game there.

“There’s nothing better than the lights going on and the environment that creates simply by playing in the evening,” he said.

Boyer said he’s proud of how the Golden Eagles have won games in every manner possible this season, including times they’ve gotten big leads early and times they’ve come from behind.

“Overall, I’m impressed with the group, their body of work over the season,” he said. “I think they deserve to be the No. 1 seed, deserve to host. Now, the question is, can we go on and pick this season up one more level and take another big step for the program and make the national tournament.”